ER trips and ambulance rides to treat hypoglycemia and adrenal crises were routine for us during that time. The night before we were to leave for Colorado was no different. He ended up vomiting which led to hypoglycemia. Luckily there was no hospital admission this time only fluids and high doses of hydrocortisone in the ER. We returned home sometime around 3AM. Our sitter was due to arrive at 6:00. Driving through western Kansas and eastern Colorado (we’re talking small rural towns, very few services, and no hospitals) with a medically fragile toddler was a daunting task on a good day let alone immediately following an ER visit. We pleaded with the ER doctor to advise us on what we should do. He encouraged us to go since our son was probably the most stable immediately following the ER treatments, knowing we would be in the care of multiple excellent doctors upon our arrival in Colorado. So we postponed our departure time by a few hours in order to get a little sleep, then we headed west.

We made it to the hotel safely only to find our accommodations less than satisfactory. It was actually a pretty cool hotel, and I’m not generally a picky guest, but when the doors to both our sitter’s room and our family’s suite [off the public hall] didn’t even latch and customer service didn’t see our concern, I got pissy. My husband got really pissy. We were told every room was booked. So there we were in an unfamiliar area with a young woman in a room she didn’t feel safe in and two small children at bedtime. Too tired to argue with the hotel manager any longer, we decided to stick it out for the night and contact our hospital liaison in the morning to ask for a second hotel recommendation. We spent that night laying on the floor of our unsecured hotel suite while our 2-yr-old son puked again and again and again. We monitored his blood sugar and he was somehow able to maintain without us having to go to the ER. By morning we were exhausted and in disbelief but carried on as was our usual. (We spent all of 2011, 2012, 2013, 2014, and half of 2015 in shock and exhausted with no time to recover.) We moved hotels which ate into the one family day we’d had reserved, but the new accomdations were worth the sacrifice. 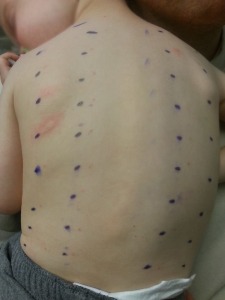 The next day, Monday, consisted of our first consultation with the head of the EOE program followed by the first round of allergy testing at National Jewish. The consultation was long and exhausting but not nearly as traumatic as what was to come. The patch test consisted of us supplying actual samples of foods our son ate on a regular basis. They mixed tiny bits of his food with something in the lab and then pricked his back with tiny little needles dipped in the food mixture. They assured us it was more scary than painful, but it was awful nonetheless. Then we watched for reactions. That moment I saw his skin turn red and start to swell was one of mixed feelings. Part of me was relieved to see results as justification for what we’d just put our son through; the other part of me resented what I saw, wishing this wasn’t the answer. The results showed reactions to five foods: eggs, soy, dairy, chicken, & green beans. A couple of those confirmed [in a big way] what we had already suspected and had previously removed from his diet, but some were new and were immediately added to his list of restricted foods. (The results were not meant to be definitive answers, but they offered pretty solid confirmation and guidance which has led him to better health since removing them from his diet.)

That night in our new hotel room, he started vomiting again. Around 6:00 or 7:00 the following morning, we discovered his blood sugar had dropped to 40, a critically low level. EMTs were called to our room and they rushed him to Children’s Hospital Colorado. I honestly don’t know how he survived the ER experience. They couldn’t get an IV started for the longest time, then they  couldn’t get to his steroids because the locked medication cabinet was located in a closed construction area. Seriously. He literally defied the odds that day. He should not have survived that ER visit. I can’t even begin to describe the frustration and helplessness we felt. I was physically ill from the stress.

He was finally admitted for 3 days and missed several of his appointments, including additional allergy testing and feeding therapy. Luckily, the main hospital was much better than the ER. And the endocrinologist we were scheduled to see was able to come to him while he was inpatient. After running additional labs and conducting an exhaustive review of his history, her assessment agreed with what we and our endocrinologist back home had already suspected: Before we realized he was allergic to dairy, his asthma was not controlled; therefore, his immunologist increased his dose of Flovent, an inhaled corticosteroid commonly used to treat asthma. (Had we only known removing dairy sooner would have avoided all of this…) His pituitary gland picked up on the high levels of corticosteroids in his system tricking it into thinking there was no need to send any ACTH to his adrenal glands. After sitting around unused for several months, his tiny little adrenals atrophied and completely shut down. So his adrenal insufficiency was actually adrenal suppression due to inhaled corticosteroids.

He was finally released from the hospital late Thursday afternoon. We awoke in the middle of that night to our older son throwing up all over the pristine white bed linens of the Cambria Hotel. Un-frickin’-believable! I actually linked to this hotel because unlike our first one, the staff at Cambria was absolutely amazing. They knew we were having a rough week and went out of their way to make us feel well-cared for. They didn’t even flinch when we presented them with a trash bag full of pukey bed linens.

The next morning, Friday, we left our oldest son with the sitter while he recovered from his stomach bug while we seized our only remaining opportunity for feeding therapy. It was a long day but fairly uneventful. That night while eating our eighth Qdoba meal of the week (it was right next to the hotel), we discovered an ice storm was just about to pop over the Rockies and blanket our entire route home. We were faced with the immediate decision to leave almost instantly (although we weren’t even packed) or accept the fact that we would have to stay in Colorado a day or two longer. We reluctantly made the decision to load up and drive through the night to try to stay ahead of the storm. It was almost bedtime for the boys, and there we were rushing around, loading up to drive across no man’s land in the middle of night with two small children – on very little sleep. And with an ice storm barreling down on us.

We loaded up and headed east. It was turning bitterly cold by the minute. And the wind was fierce. My husband started out the drive while I tried to sleep in the back of our minivan. The plan was for all three of us adults to take turns because my husband and I were so tired, and I typically don’t drive at night because it makes me fall asleep. I hadn’t been able to sleep in the van, but I took over the wheel in Colby, KS.  Everyone slept silently in the van. Wide-eyed and white knuckled, I drove into the darkness while the van rocked and shook in the wind. The storm was literally biting at our tail, chasing us all the way home. I remember driving through the wind farms in western Kansas. The only sound was the roaring wind and the road under the tires. There were virtually no other travelers on the 500 mile stretch of highway. The only things I could see were the road immediately in front of me and the red blinking lights on the top of each of the hundreds of windmills dotting the prairie. Talk about an eerie sight during an already terrifying night… That was the moment I literally shook my head in disbelief, truly wondering if I was in some alternate universe.

I took our exit off of the interstate just as the sun began to rise. I had been awake for 24 hours straight and driven for nearly 5 hours. Not even once did I feel like I would fall asleep at the wheel.